President of Armenian evangelical churches in Europe tells CT the Turkish and Azerbaijani diasporas are threatening their neighborhoods, as he struggles to maintain Christian love. 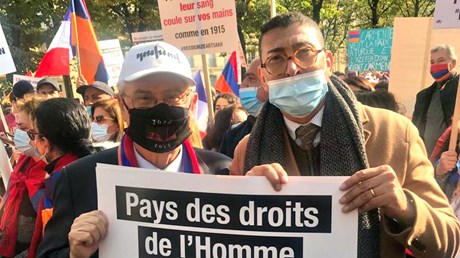 Throughout the six-week war in Nagorno-Karabakh, the Armenian diaspora rallied in support of an ancient Caucasus mountain homeland they call Artsakh.

Overall, they donated $150 million in economic and humanitarian aid.

In California, they blocked freeway traffic to protest the lack of news coverage.

In Lebanon, they hung banners against Azerbaijani and Turkish aggression.

And in France, they successfully lobbied the senate for a non-binding resolution recognizing Artsakh’s independence. (International law recognizes Nagorno-Karabakh as Azerbaijani territory.)

The symbolic vote angered Azerbaijan, which called for France’s removal from the Minsk Group, co-chaired with Russia and the United States and tasked with overseeing negotiations with Armenia since 1994. Turkey has petitioned for a leading role.

But the consequences go beyond regional politics. The controversy could threaten the French social peace, already riled amid President Emmanuel Macron’s campaign against Muslim “separatism.”

Azerbaijan, and especially allied Turkey, also have an extensive diaspora throughout Europe. And last month, their supporters led demonstrations in Armenian neighborhoods in Lyon, vandalizing the Armenian genocide memorial.

France then banned one of the more violent groups, the Grey Wolves.

To gauge the situation, CT interviewed Gilbert Léonian, a Paris-based pastor and president of the Federation of Armenian Evangelical Churches in Europe. Of the roughly 500,000 French people of Armenian origin in France, about 3 percent are evangelical, worshiping across nine churches.

(Like many French pastors across all ethnicities, Léonian studied at the well-known evangelical seminary in Vaux sur Seine, near Paris. …